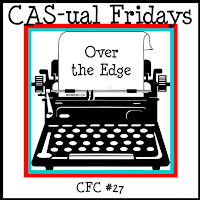 I've not had much time for crafting again lately, but yesterday it was our craft club day, and for once I managed to make, not just one card, but three.....I know, amazing!!( mind you, it's all down to Jacqueline who did all the hard work and prepared all the elements for us)

I'll show you those later, but first here is a card that I'll be entering into the CAS-ualfridays challenge #27 where the design or embellishments go over the edge of the base card.

As I've used traditional Christmas colours of red, green, and gold I'll also be entering it to the Make My Monday challenge #23, where Christmas is their months theme, and this week it's Traditional or Vintage.

So here it is 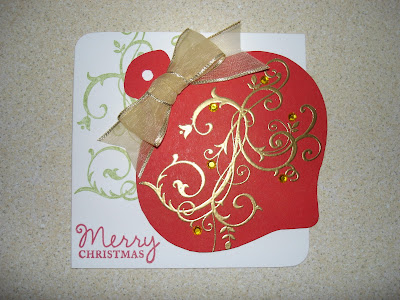 I started by drawing around a bauble card of my friend Louise, on some red card and cut it out. The flourish was Versamark stamped on it and heat embossed with gold powder and then gems randomly added. The same flourish was then stamped in green on a 5" square white card that had opposing corners rounded, before the bauble was placed slightly overhanging the edge, as if tied to the green branch behind it. The finishing touches were the gold bow and stamped red sentiment. 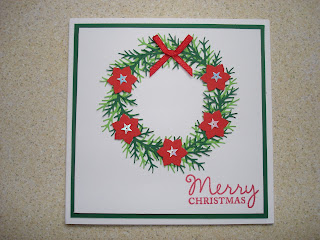 Here's one of the festive cards we made at our workshop. I love that it's so pretty yet so simple to make, and again in the traditional red and green colours.

Thanks for looking at my blog today, and I'll be back soon with some more projects.