For those of you who dont know, my 4 year old nephew Nathan, has been army and elf crazy since seelng the 3D movie "Arthur Christmas" last December.

Now he is at the age where he is flexing his behaviour muscles, so I came up with a Special elf called Boris whom Santa has given the task of watching Nathan all year to see if he's good or bad ( just like the film!!). Recently he has gone a bit wild and naughty, so Boris has been forced to write Nathan a letter and send him a photograph of what he looks like!! 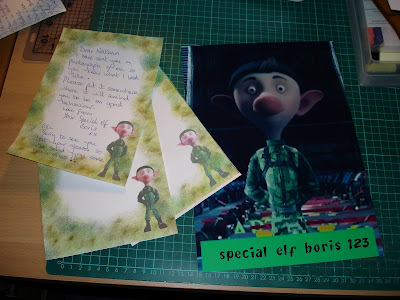 We didn't know if this would work or not, but the excitement on his face when the postman delivered a letter just for him, was enough to melt the coldest of hearts. He said he felt really special and straight away said " Nana, I've got to write back to him after tea" !!, so it looks like I need to make more army camouflage note paper for all the corresponding Boris and Nathan could be doing!!

Thank goodness I can use the internet again without fear of the connection going down half way through something important.

I'll be back tomorrow with something else I've been asked to make for my friend Pat.