For today's card I have combined two challenges. 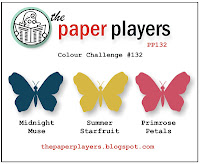 The first is a new challenge blog I've discovered, over at Fab Fridays with this sketch,

and The Paper Players with these colours

Here is my card 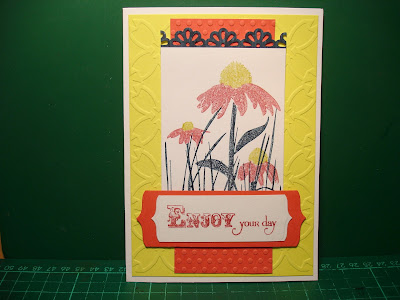 I love the daisies in this set, and I haven't used it for ages, so thought I'd give it an airing. I used my favourite technique of colouring the stamp with my new Write Markers before stamping it onto white card. Both the yellow and pink ( strangely the photo makes it look orange but it is pink, honest! ) cards, were put through the Big Shot in embossing folders before layering them on the base card. The blue flower border was made by colouring some white card blue with the marker, and cut with a border punch and stuck under the central panel. I cut the banner with with two SB Labels Nestabilities that were bigger than the pieces of card so that just the ends were embossed and shaped, and stuck it down on 3D pads.


This morning I helped my friend Rita, sort through boxes of china and kitchenware that belonged to her Mum, Angela, who recently passed away from the dreaded C word. She gave me a beautiful heavy crystal vase that I lovingly wrapped in tissue paper and placed in the boot of my car with boxes of bric-a-brac for the charity shop. After dropping the boxes off, I thought my vase would be ok on its own, and it was, till I reversed onto my slopping driveway. When I opened the boot, the world turned into slow motion time, and I helplessly watched as the vase rolled towards the lip of the tailgate. I bent to grab it, but ended up juggling with it from one Arthritic hand to the other, finally with it smashing in thousands of crystal splinters on my drive. Somehow, during this commotion I sliced my little finger on my left hand, and middle finger on my right, and even now, 4 hours later, the bleeding still hasn't stopped.

It's the craft club tomorrow, and then I'm in hospital for another IV treatment on Wednesday, and will be in bed till the weekend, so I hope to be back then.

Please bear with me, so until then, keep warm and Happy Crafting