Today, this is my DT card for The Male Room, where our theme is NATURE
and I'll also be entering it in three challenges.

The sketch is from Clean and Simple,

the colours from CAS Colours and Sketches 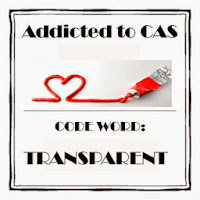 and Addicted to CAS are looking for something TRANSPARENT 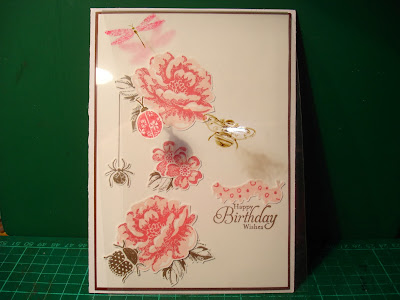 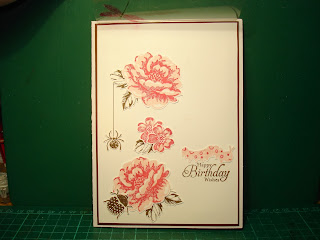 This is what the card looks like without the acetate overlay that bares the Dragonfly, Bumblebee, and Ladybird. I didn't mind stamping all the insects, but when it came to the spider, it freaked me out! I hate them! Thank goodness it was only a small one.

I had a terrible start to my day. I plugged my laptop in to see what challenges were out there, so I could prepare an idea, and pack the relevant supplies, as I was off to my friends for a crafting/coffee morning. After about five minutes, I realised that the TV and my alarm clock had gone off, so thought I had a power cut. Then, I saw that lights were on in my neighbours house, so I rang her (on my mobile, as the house phone was also out) and her house was fine. I made a mercy call to my Step Dad, who turned up an hour later. He discovered that the electrical fuse box kept tripping out, so we had to check every wall socket in the house. Sounds easy, but with me in the house plugging something in, I was then having to get to the top of the stairs to shout down to Dave in the garage, who would try the trip switch again. Eventually, we found that a wall socket had fallen off the wall that was hidden by my desk (it had never had a metal wall bracket set into the wall, and I've been here for almost 13 years!!). Then we found out that the garden pond pump had also fused ( what were the odds that this would blow at the exact minute that I plugged my laptop in!!!!! Anyway, with electric back on, I was in no mood to craft so didn't go out, but made this card later.

I'm in hospital again today for my treatment ( I cant believe how quickly four weeks pass by ), so I'll be resting for a couple of days. I hope you have a good week, and an even better weekend.