I am absolutely exhausted today as I've been doing the gardening since 9.30am. It desperately needed the weeding done and the lawns had started to grow again after all the rain we've had. So 3 full bin bags later I've crashed out on the sofa in agony. My RA doesn't like gardening so my entire body is screaming with pain, even blinking hurts!!


After lying here stifly on the sofa for several hours ( watching things I've Sky +'d  and not watched ) my joints have started to move again, so this afternoon I have made a quick card for the Less is More challenge
Their theme is a One Layer Card entitled "Seeing Double" where there needs to be 2 of something.

This is what I came up with 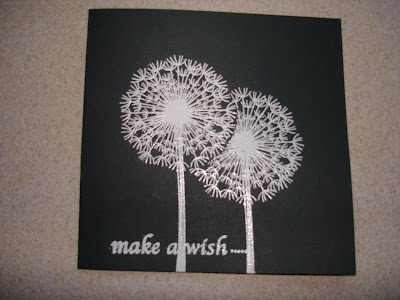 The first dandelion was stamped with Versamark off center on a black square card and then I heat embossed it with white powder, and covered with a Post It. The second one was stamped to the right of the first and slightly lower down ( so it looks like it's behind the first), and again heat embossed. The sentiment was added at the bottom and treated the same as the dandelions.

I love dandelions and have wanted a stamp of one for ages, so I couldn't leave it at just one and tried a different colour combo. Here it was stamped in black on a cream card and green sponged around it to give depth. I think I prefer the white and black one, what about you?? 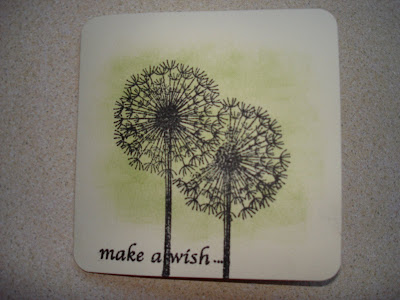 While I was at my sister Cassy's on Sunday we went to the Market Harborough Arts Festival. There were lots to see and do, from circus type acts, to a drumming band ( which Cassy was part of ) , children's fairground rides, and Bric-a-Brac and craft stalls.

As I had had such a bad week Cassy treated me to the dandelion stamp and some Papermania clear 'Relations' stamps. So Thank You Cass, I hope you like what I've done with them.

I hope I will have more energy tomorrow and get back at the craft table creating something.

Thanks for stopping by and hope you can come back again soon.