Today I've not had any time to do anything but finish my Spiderman card for Nathan's birthday next Friday. I have downloaded pictures of Spiderman's head and one of him in swinging action, onto white card from a free Film Characters web site, and coloured them in with Pro markers before cutting them out. 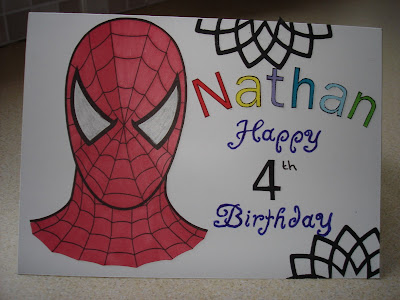 I folded an A4 white card in half for the card base and stuck the head on the front. I stamped the letters of Nathan onto coloured card bits and cut them out, and stamped Happy Birthday all to the side of the head, with a number 4 in the middle. I then cut 2 SB Lotus Pendants in the BS in black card and stuck them on so that they would suggest spiders webs ( well hopefully anyway!)﻿ 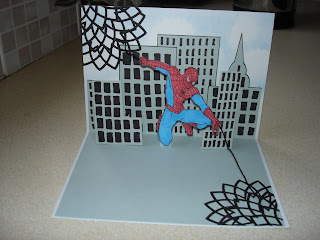 Inside the card I sponged the top of the back page with blue ink around a scalloped circle ( cut in my trusty BS) to look like clouds in the sky.
I then cut some grey card slightly smaller than the card base. and cut the top half into a City skyline of tower blocks, and added black Pro marker windows.( I did this freehand, which was a big mistake with my shaky hands, but it was too late to change it once I'd started ). I then cut 3 slits on the fold of the grey card and pushed them inwards against the fold. The Spiderman was stuck onto the center slit and a tower block was put on the side ones. 2 more SB Lotus shapes were cut and stuck on opposite corners as webs, from which I strung some black embroidery silk thread and fixed the ends to the hands of Spiderman so he could swing from building to building.

With this side view photo I've tried to show you the "pop up" side of the card, which also makes the city look more 3 dimensional. 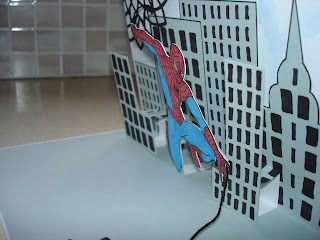 I hope Nathan likes it as it's taken hours of fiddeling to put together!!
Now I'm used to playing Super Heros with Nathan, but yesterday I went into action for real!!
Yesterday afternoon, I was called around to my elderly neighbour (and widower), Gordon's house, by his visiting friend June. She was in tears because she was frightened that Gordon was dying. I went rushing around and went into Police mode ( after 20years service you never forget your training ) and did my first aid bit, put him in the recovery position, and dialed 999, and told June to make some tea to keep her occupied. I also thought we were too late to save him, but by some miracle the Paramedics arrived and brought him back!! It turned out that he had gone into a diabetic coma, and when he came back to life he told us that he hadn't been doing his blood sugar levels for a week as his little blood reader had broken!!!! I could have killed him myself when I heard that!. He was refusing point blank to go to hospital against all our pleading, so I stayed with them and tried to take their minds off the traumatic afternoon they'd had. Anyway, June had phoned Gordons son, Stuart, in London to come home, and when I collected him from the railway station I told him what the events were and that we were to take him to see his GP today, which we did. He's got to have some tests done but Stuart has to return to London, so I'm left responsible for his dad which I'm not too happy about, but I have set wheels in motion to get him some home help. I hope that he will be ok over the weekend,but they all know I'm here if they need me.
﻿
There's no rest for the Wicked!!!!

I hope you all have a good weekend, and can drop by again soon.