They are for the CAS-ual Fridays  where they want something using Punches or Dies,


These are the cards I made,   Aaawwww! I love this die, and want to Thank the DT at CAS-ual Fridays for their Die challenge as it reminded me about the stash of dies I've not used for ages. 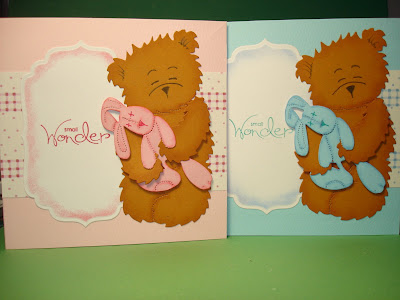 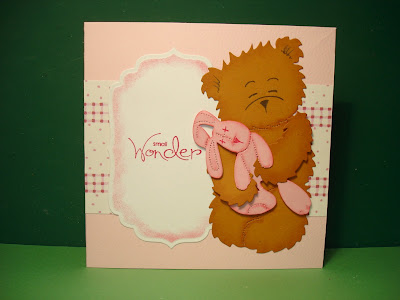 This is the pink version 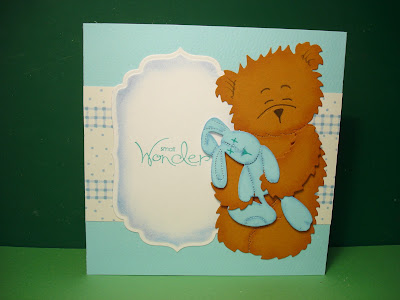 and this is the blue! 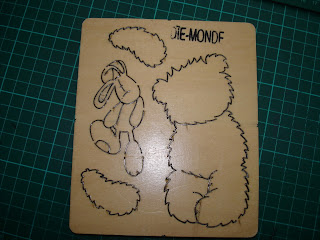 This is the die itself which I got off a popular auction site! ( where many of my SU sets etc. come from) and then put all the pieces together

The bears and rabbits ( runny babbits, as Nathan calls them!! ) were all sponged around the edges and the face details drawn on with SU Write Markers. The rabbits and paws of the bears were raised on 3D pads to make them more dimensional.


This morning I was a guinea pig for my friends Grand daughter who is doing Hairdressing at college. She needed someone with long hair to have a "Spiral perm", and in a moment of weakness several weeks ago, I agreed. Now, I was one of the masses in the 80's that became a poodle while perms were all the rage, but now heated wands and tongs have taken over and curls can be washed out easily!!!  I will let you know tomorrow what I think! I hate having my photo taken ( as you can tell from the absence in my blog profile ) so I wont be making my new wig public, sorry!! but just imagine Brian May from Queen, and you'll know what it's like.

Thanks for dropping by today